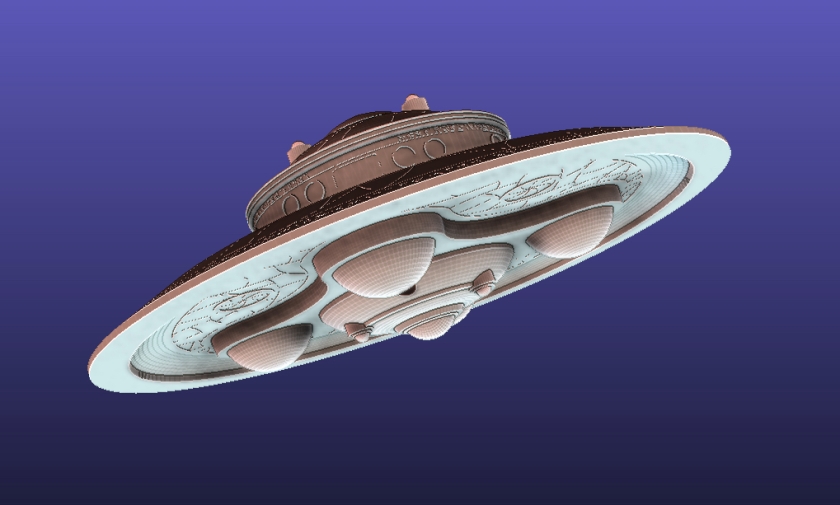 Progress continues apace on the sculpts of Saucer War One’s miniatures; Today, I’d like to show you the mighty Triga Beta type saucer, heavy-hitter of the Noordican sky-fleet.

Bigger and more versatile than its Biga stablemate, the Triga was the Annunaki’s enforcer. Rebellious worlds or provinces were brought to heel by clouds of Trigas descending upon them, dealing out the wrath of the gods with crushing Gravitic Beams and merciless Surdu hunter-drones.

The Triga can also be equipped with power-draining beams and terror field generators, which the Noordicans deploy against their barbarous cousins on Earth, in their efforts to end their savage, warlike ways.

In 1/200th scale, the Triga is 73mm across and will be available as both a downloadable, 3D printable file and as a resin miniature.

Unlike the government, I’m not afraid of UFO Disclosure, and to prove it, here’s the production image of the Triga for a small behind-the-scenes look at how a Saucer War One sculpt begins. All the Noordican saucers are being sculpted by the very talented Chris Osapai of Protokraken, who, I think you’ll agree, has done a cracking job with the Triga.

I hope you’ve all enjoyed another look at what’s in the works here at Miniature Martin right now. There’s also been progress with the rules and mechanics, so I think next week, we’ll take a look at the Weapon Discs, and how the dangerous devices of Saucer War One are deployed for deadly duels.

Until next time, everyone — Watch the Skies!

After a long hiatus, (sorry, folks!), we have some new progress with Saucer War One! In a mad flurry of sculpting, I’ve hammered out the Silvercat in a mere three days!

The Silvercat is the primary interceptor-saucer for the forces of ANTIC, defending the skies of Earth against the predations of Das Mondreich and the Noordicans.

It will come with magnetisable weapon pods of 30mm cannons or ‘Mighty Mouse’ 70mm aerial rockets. Very much the weapons of choice for fighting flying saucers in the 1950’s!

The Silvercat will be available as a print-ready STL file, or as a complete resin miniature when Saucer War One launches later this year.

I’ll have my Elegoo Mars 2 Pro 3D printer soon, so I hope to show off some printed, and then painted, samples of the ‘cat in a short while. No more vapourware!

A bit excited, because I can see the opposing fleets of saucers starting to assemble as concepts become sculpts, and will soon be real, actual models.

The rules themselves are coming along now; I ran into a probability wall months ago, and it killed my enthusiasm for writing the durned thing, but letting it simmer on the back of the stove for a while did the trick. Now I aim to offer the beta-level rules, cards, tokens etc. as free Print-n-Play PDFs in a short(ish) while.

So, that is the current situation with Saucer War One. Thank you for keeping up with the journey I’m taking as I move towards being an actual game publisher. It’s proving a tough road, but I think it will be worth it all. I hope you’ll soon have good reason to agree!

More to come soon, so until next time;

Hello again, everyone! Today, I thought I’d share some new artwork from the Saucer War One Invasion ’52 sourcebook which will be released with the actual game when it becomes a physical reality. (Stay tuned to find out just when that should be.)
Let me reveal the blueprints of the NS-97 Silvercat!

This was ANTIC’s primary fighter in the opening days of Saucer War One. Rushed into service just in time to thwart the Noordican attempt to land on Washington DC in July, 1952, it was lightly armed and slow compared to the incredible machines thrown into the fray towards the war’s end. Nevertheless, the Silvercat was well liked by its pilots, and many of CAPER RED’s aces scored their first kills in this agile craft, defending the skies of North America.

When it becomes a 1/200 scale miniature, the Silvercat will be 53mm in diameter. It will have the option to carry an armament of either four 30mm cannons, or twenty air-to-air rockets.

Credit where Credit is Due

The Silvercat is very heavily based on a real lenticular aircraft design from 1950. Or more accurately, on a model of that design, which was a concept by this man – Nick Stasinos (in bowtie).

Stasinos was a graduate of a college programme run by Northrop Aviation — the people who built iconic American aircraft such as the P-61 Black Widow, the F-5 Freedom Fighter, and more recently, the suspiciously alien-looking B2 Spirit stealth bomber.

Clearly influenced by the sudden and dramatic rise in flying disc sightings since 1947, in 1950 Stasinos designed and built this neat study model of his NS-97 fighter. Sadly, it seems Jack Northrop wasn’t that impressed, because the NS-97 was never taken further than this. (Or was it…?)

Sadly, Nick Stasinos left behind a promising career in aeronautics for the life of an insurance salesman. Or maybe he actually went to work for JAPE — ANTIC’s R & D department — and the insurance gig was merely the cover he was given by the agents of PRANK to conceal his part in the war to protect the Earth?

You’ll have to wait for the Invasion ’52 sourcebook to discover the incredible truth of this and other secrets of the war we never knew!

See you next time, and remember: Watch the Skies!

Many of you will have noticed (and I hope, enjoyed), the preview art of the Noordican Biga class Saucer last week. Well, someone who certainly did enjoy it was talented 3D sculptor Chris Osapai — and look what he’s made!

Yes folks, we have our first sighting of a Saucer War One miniature-in-the-making! Here’s a couple of renders of the Biga that Chris has digitally sculpted. Charioteers of Venus, rejoice! Chris says he blitzed out this beautiful sculpt in a mere six hours. Only six hours? I suspect alien mind control!

Chris has done a superb job of capturing the classic ‘Adamski saucer’ lines of the Biga, but with all the engraved detail that is such a hallmark of Annunaki technology.

Necrossia is a set of 3D printing files of alien artefact scenery for 28mm wargaming.
I think a lot of the files are quite ‘scale agnostic’ and could be suitable for 15mm or even micro-scale wargames, too.

Although the Necrossia Kickstarter has successfully concluded, you can still get aboard for late pledges. Grab a 3D printer, and you’ll soon be surrounded by ancient alien monoliths!

Speaking of 3D printing, I suspect many of you will be excited to hear this:

Grow your own Flying Saucers from Vats of Chemicals

Inspired by Chris’ excellent Biga sculpt, I’m bring forward an announcement. The free print n’ play playtest version of Saucer War One is scheduled to be available for download in June-July this year. When it launches, we will also launch a set of six .STL files of ANTIC and Noordican saucers for home printing!

This will give budding UFO-jockeys a leg-up into getting their saucer fleets into action, well before physical miniatures are released.

The Saucers That Time Forgot

A Podcast of Flying Saucer History and Lore

A Mere Matter of Painting